I have been in the fitness business for well over a decade and in that time I’ve heard it all when it comes to the “best” diet, workout or type of exercise. I have seen super foods come and go, coffee was good for you then it was bad for you now I think it’s good for you again. You can flip through the latest workout in your favorite magazine or watch the “in” training program on YouTube all of it works and none of it works!

Arnold Schwarzenegger didn’t wake up one morning in 1966 and say “I’ll start weight lifting today and in a year’s time I’ll be Mr. Olympia” nor did Dan Gable just luck out and win 3 NCAA titles, Olympic Gold and 15 NCAA team titles as a head coach. Everything they accomplished was done through hard work and one key ingredient, consistency.  These guys and more all attacked their goals in different ways as do all successful people but again the one common factor is they are all consistent in their work towards the goal.

Consistency works no matter who uses it or how they use it. Let me give you an example, Bob and George buy a tomato plant and they both plant it in good soil. Bob set a schedule to water, fertilize and weed his plant he sticks to it and after a few months, Bob is seeing his plant produce big juicy tomatoes. George on the other hand watered, feed and weeded his plant when it was convenient to him and after those same few months had battered little plant bearing small sad fruit. Both George and Bob were consistent in what they did Bob was consistent in caring for his plant and George was consistent in his lack of attention.

The same is true for an exercise routine, diet or sports training any of them within reason will work and get you in great shape as long you are consistent in your work and consistent in pushing yourself to that next level on the other hand If you are consistently eating poor, sitting on the couch and avoiding the gym your body will reflect that also.

*One-week FREE offer valid for new guests. Former gym members/guests are not eligible. Must live within 20 miles of the gym and provide a valid form of ID.

We're not around right now. But you can send us an email and we'll get back to you, asap. 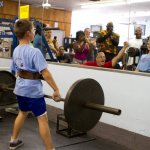